Welcome to the first issue of the NGICP eNewsletter. There’s been a lot going on this year and we’re excited to share with you all that’s been happening with the program. 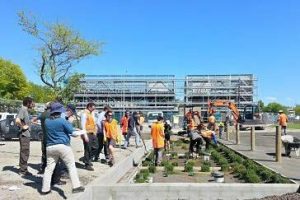 Train-the-Trainer Goes International: The Water Environment Federation conducted New Zealand’s first NGICP Train-the-Trainer (T-t-T) program in May 2019 to fourteen New Zealand professionals. The purpose of NGICP’s T-t-T program is to offer future green infrastructure trainers and leaders best practices and techniques in program development, assessment, and learning to advance a “think and do” culture throughout the industry.

The training cohort consisted of government program leaders, private firms, and decision-makers, who will be tasked with deploying the NGICP Certification across the country.  New Zealand’s initial audience for NGICP Certification is workforce development (underemployed, unemployed, and/or under-educated, uneducated). New Zealand hopes to launch its first NGICP training program in September 2019.

NGICP is working on the following pilot programs to expand the program to reach a broader audience.